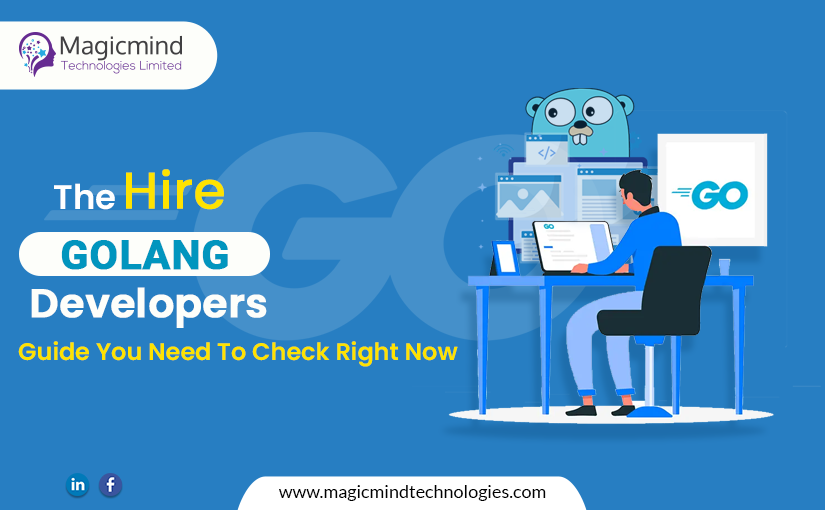 Go language, also known as GoLang, is built by Google in a statically typed, compiled and open-source style. It is an efficient, readable, simple and high-performing language whose official website is golang.org.

How Golang came to existence

The Golang was devised just to ease out the complex codebases of Google. Ken Thompson, Rob Pike and Robert Griesemer designed this language collectively because they expressed their disliking for the C++ language.

While the language’s announcement was made in 2009, it was officially made open-source in 2012 with the very first version, 1.0, released at that time.

The language quickly gained immense popularity by becoming the first choice of developers for its concurrence, efficiency, readability and simplicity. It has the power to run various tasks at the same time. The technology is mainly used for mainly backend programming, cloud-based programming, developing games and also in the fields of data science. It is also immensely popular for creating tools for command lines.

What are the skills to be looked at in a GoLang Candidate?

Why GoLang should be learned by the professionals

Go or Golang is indeed one of the simplest programming languages which are extremely easy to pick up, especially when one has the knowledge of others. It is even possible to learn the language’s fundamentals in just one sitting.

As mentioned earlier, simplicity is indeed one of the main reasons for learning the language. Many developers who are confident in using GoLang along with unparalleled confidence in their technical abilities, in just a few hours can come up with a basic app.

GoLang has easy-to-read and solid documentation which can be accessed on its official website. Alongside its documentation, Golang also has an active and supportive community by it so that the professionals and experts can always find help when stuck.

The hashtag #golang is commonly used on Twitter, so in case you get stuck, you can tweet your question and attach the hashtag to it.

GoLang is a multipurpose language that can be used for various tasks like cloud computing, data science, web development and more. In case the professional wants to build a career in cloud-based technology, GoLang is perhaps the best technology for him or her to learn.

Popular platforms like Google Cloud, Kubernetes and Amazon Web Services all are known for supporting GoLang.

As per the survey of Stack Overflow Developers in 2020, GoLang developers have the third-highest pay scale right after Scala and Perl, the median being $74,000.

This figure climbs gradually as the popularity of GoLang climbs every year.

The ways to Hire GoLang Developers

With the technological revolution that is sweeping each and every one of us drastically with every new innovation on our way. This has given rise to the tech-based businesses that are strategizing to come up with their own innovation with GoLang. The rising demand for GoLang developers has the recruiters wondering about the best ways of hiring them and Magicmind Technologies is here to give some light on the process in this informative. Keep scrolling to read below.

The most efficient steps of hiring Golang Developers

It is important for the recruiters to first understand what the job profiles require from the selected candidate. Unless the recruiter has zero ideas about what the role is about, he or she will not be able to conduct the research for the most eligible candidate profiles. Only by having a correct idea of the qualities, abilities and skills a company seeks in a candidate, the best-suited profile can be selected and onboarded quickly.

The next very important step is to write a crisp, insightful and on-point job description that will attract the right candidates who meet the selection criteria. This will also help the recruiter to narrow down the hundreds of profiles received after posting an unclear job description. A crisp job description also gives the junior and aspiring candidates an idea about the areas they should upskill to get better placement in the industry.

Another amazing way to come across the most eligible candidates is to ask peers like friends, employees, colleagues, family members and even social media (especially LinkedIn). Recruiters can directly get hold of the candidate profiles through these mediums. Also, unlike job portals, communication takes place more quickly and directly. The recruiter can directly call the candidate for the initial round of interviews without having to wait for the shortlisting of the candidate’s profile by the higher authority.

Hiring freelancers is a risky move for the company authorities because these professionals are known for working as per their will mostly and not as per the company’s timing. A very little number of freelancers can be trusted in this case, because if the project is not delivered timely, the innovation strategy will be hugely affected.

This is perhaps the best decision a company’s recruiter can take (if they are not building an in-house team). Generally, in agencies, there exists a team of professional software developers, each of whom specialised in different languages. The agencies work under a strict NDA where they abide by the policies like on-time delivery, building products as per client requisites and also maintaining secrecy. All these, that too in an affordable package.

What is the cost of hiring GoLang Developers in:

As per Ziprecruiter.com, the average salary of a GoLang developer is $129,401.

The United States of America and South America have a huge difference in the economy and hence the cost is significantly lower in the latter. For South America’s GoLang developers, the average salary is between $76,000 to $100,000, depending on the experience, seniority and experience.

Eastern Europe has similar tariffs as South America due to economic differences as well. While looking up, it was found that the average salary dwindles to around $100,000.

What are the hourly rates of GoLang Developers?

There’s another way a company can hire GoLang developers and that is based on the hourly rates. Where salaries are great for hiring full-time and in-house developers. For projects that are not perpetual for the company, i.e., they are short-term, hiring GoLang developers on an hourly basis is a wise decision for economical reasons.

Here’s an insightful glimpse at the hourly rates of hiring the developers: 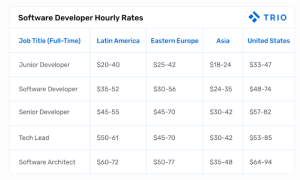 What are the most popular technologies related to GoLang?

Magicmind Technologies’s versatile team of software developers and engineers are interviewed, trained, and pre-vetted for meeting the dynamic technological requisites of the tech-business sector. They are capable of adapting to any technology or solution backed by the power of proper technology and market research.

At Magicmind technologies, we keep our tech professionals at a higher standard by recruiting the top talents and potentials coupled with unparalleled skills. Our projects provide them with new experience and exposure to sharpen their skills further for meeting new standards with every new work.

Another benefit of hiring our agency is that you, the clients are saved from incurring the cost of in-house candidate salary. Enjoy teaming up with highly qualified and experienced full-time developers from our agency at just a fraction of your total budget.